This walking route opens up a small window on La Vall de Gallinera so that the visitor can discover for themselves the charm of the ‘Eight Villages’ and the warmth of the local people, as well as the incomparable beauty and enchantment of one of the most magical places you could ever visit.

Although the designated route shows the start of the 8 Village Walk as being at the spring called Font de la Mata de Benirrama and its end at the similarly named Font de la Mata de Benissili, one should know that it can be traversed in reverse. Other advantages of this walk is that it can be taken in stages, for example, from one village to the next and back, to do the whole 14 Km at one stretch. It is completely up to the individuals concerned. The ease, or difficulty, of the route is low and there are several stretches (shown on the map) that can be traversed by bicycle. In each of the eight villages the walker will find a large signboard where the place-name and its origins, its history and the most important information and places of interest of the village are explained. Along the route one can try the local cuisine typical of La Vall de Gallinera in any of the bars and restaurants spread throughout all the villages and also purchase local produce in the different cooperatives and/or shops. One also has the opportunity of spending the night and enjoying the comfort and hospitality of the numerous ‘casas rurales’ (local hostals) to be found in the area.

The route starts at the spring called la Mata de Benirrama and wanders its way towards Benirrama village passing the spring and abandoned moorish village of Benimarsoc. In Benirrama turn to the right, passing in front of the church of San Cristòfol and then take a short walk through the village streets where the Via Crucis can be seen finally leaving the village on the main road then, after some 50 m, take a left turn along the country lane to Alcúdia which takes you on to Benialí. On the way you pass the abandoned moorish village of Alcúdia and, a little further on, the spring of the same name. Continue on this lane until you reach the main CV-700,  and then, taking care, cross this same road and follow the lane into the village of Benialí.
After traversing the streets of the Benialí, you arrive at the Ayuntamiento or Town Hall, and 40 m further along the main road take the street by the school, calle del colegio – to the right you can see the fountain with its ‘washing place’ and a little further on the church of Sant Roc. Even further down take the camino de Baix which will lead you up to Benissivà.
On entering Benissivà pass in front of the church of Sant Miquel and follow the street calle del Raval, and then turn left into the main street Olmos Canalda, which takes you up to a small square alongside the main road. Carefully cross over the road, and climb up the stairs to the village of Benitaia.
Traversing Benitaia using the streets Enmig and de Baix, you pass alongside the orange grove and arrive once again at the main road, which you cross over to take the path towards the ´washing place´ of Benissivà. After this you return to the main road by keeping to the pavement for 60 m and take the path to the right leading back to the main road itself; 200 m further on turn right onto the road marked to the swimming pool – camino de la piscina – which you follow until you reach La Carroja.
Entering La Carroja on the path that passes under the enormous carob tree you arrive at the church of Sant Francesc de Borja. Turning to the left you can visit the spring called fuente de Baix and keeping to the path you come back to the main road, which again you must cross carefully, to take the lane called camino de la fuente de En Pere. Walk to the end of this lane - bordered on the right by a stone wall - and in about 15 m you come to the spring called fuente de En Pere, after your visit you then retrace the 15 m and continue on the lane, which passes through luxurious vegetation, until you reach the camino de la fuente de la Orenga. Follow this road downwards in the direction of Alpatró passing by the spring called fuente de la Orenga until you reach the main road.  Crossing over the main road and going down the steps you come across the fuente Vella de Alpatró. Take the path alongside the wall, which finishes in a dirt track, and which takes you into the village of Alpatró. On arrival in Alpatró turn to the right towards the centre of the village and passing through the old part of town you arrive at the square with the church of la Assumpció and the fuente de Alpatró. Continuing down the street take the calle del Llavador until you arrive at the crossroads to Llombai and Benissili, where you will see the spring and ‘washing place’ of Alpatró.
Follow the road until you reach Llombai, a small hamlet nowadays almost uninhabited and with only one street, at the end of which you can see the fountain and ‘washing place’, and then retrace your footsteps back to the road and continue in the direction of Benissili, following the signs that take you off via a stone pathway and back onto the road again.
Arriving at Benissili take the steps up on your left towards the spring and ‘washing place’ of the village; a little further on is the square and church of Sant Pascual Bailon. Continue on towards the schools and take a lane to your left through olive trees back to the road where, alongside the Gallinera river you find the fuente Vella de Benissili. Turn right once again towards Benissili, and at the entrance to the village take the left-hand street calle del Pont and follow it until you reach the dry stone wall, which is on your right, and take the small path that leads you towards the spring called la Mata de Benissili. Leaving Benissili you come across two threshing grounds, which were used to separate the wheat; the first being at the end of the street calle del Pont, and the other about 70m further on. Follow the path until you come to a wider dirt track taking you, through olive terraces, to the remains of the uninhabited moorish village of Solaneta. Continuing on this path you arrive at the spring called fuente de la Mata de Benissili – where the route finally comes to its end. 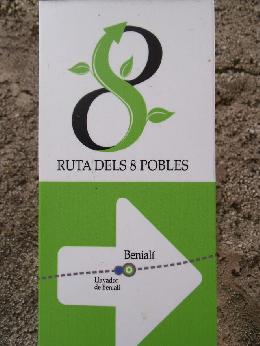 We will notify you of upcoming events and the latest news